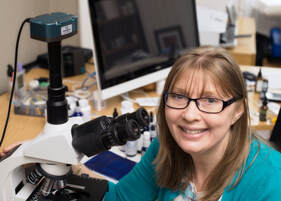 I am a Nutritional Therapist, having qualified from the College of Naturopathic Medicine and am a member of the British Association for Applied Nutrition and Nutritional Therapy (BANT) as well as the Complementary & Natural Healthcare Council (CNHC). I work in the North East of Scotland, covering Angus, Tayside and Aberdeenshire.

I have a First Class Honours degree in Applied Chemistry, and have 16 years experience of working in the pharmaceutical industry.  I now combine these 2 disciplines to give you The Body Chemist.  I understand the biochemical nature of food and its influence on biological systems and how this can manifest in health or disease.

I spent the first part of my career working as a pharmaceutical chemist making the active ingredients that make up well known treatments for asthma and eczema.  I truly believed that my work here was of benefit to the patient and in some small way I was helping cure these conditions.

In 2004 I took voluntary redundancy in order to concentrate bringing up my young family. In 2008 my youngest son was diagnosed with apraxia (severe speech disorder) and he also suffered from what the doctors called toddler's tum (diarrhoea with food particles).  He would also vomit with no warning and his pain threshold was very high.  Convinced it was something in his diet that was causing his speech and behaviour issues I tried to obtain help from the NHS.  The dietitian and consultant both agreed that he was thriving, being of the correct weight and height, and wouldn't entertain my theory that the Gut and Brain were linked and if we sorted his stomach problems we would see improvements in his speech and behaviour. I had a "label" of dyspraxia and was referred for speech therapy.

Undetered from my theory I began a long process of discovery into the world I now am passionate about, Nutritional Therapy.  Everything he ate and everything that came out the other end was recorded. I changed his diet and added the nutritional supplements I believed he needed.  Being a chemist and scientist I used all my knowledge, believing that the body is just one big chemical factory and like the chemical processes I used to look after need good quality starting material and the correct reagents in order to produce effective end products that give the desired effect.  Within 8 weeks of starting his new regime we saw a huge difference in his moods and behaviour. He was able to learn sign language which allowed him to communicate and ease his frustration.   His speech began to improve and his toddler's tum cleared. Not only that but as a side effect of changing the family's diet my other son's eczema cleared and my eldest son no longer needed his inhalers for his asthma. My son is 6 now and with the help of a fantastic speech therapist, who was always amazed at the speed at which he was improving, is a fluent talker. He still needs his supplements as without them his speech is the first to suffer.

This experience inspired me to train as a Nutritional Therapist. Now fully qualified, I continue to research into how natural medicine can help others who don't see results through orthodox medicine. I have a special interest in autistic spectrum disorders and children's health, degenerative conditions (heart, autoimmune, MS and cancer support). I am a true believer in gut flora and its contribution to health and disease.